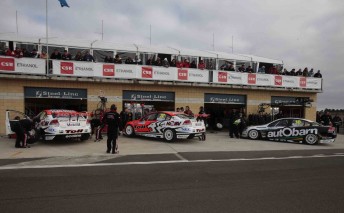 Walkinshaw Racing had all four of its cars pitted together this year. Next year, it will be split between the first and fourth garages in pit road

The pit lane order for the 2010 V8 Supercar Championship Series has been formalised, and the big news to come out of it is that the four Walkinshaw Racing cars will be split next year.

The Toll Holden Racing Team won this year’s Team’s Championship, and in doing so, have the right to be parked in the first two garages in pit road.

However, because the organisation is grouped with the Walkinshaw Racing entries (Bundaberg Red Racing), the only way it could have maintained having all four cars pitted together was to be demoted to the third and fourth team garages.

The factory HRT squad (Garth Tander and Will Davison) has elected to take its number one spot, with the Bundaberg Red cars (Fabian Coulthard and Andrew Thompson) to be the positioned as the fourth team.

It’s a massive change from this year, where the Holden cars were grouped together as the last team in pit road.

Team driver Will Davison says that it’s an advantage to be placed at the head of the queue.

“I was in two minds about it,” Davison said.

“I thought that position one was a really good one. We deserve it – we won the Team’s Championship, so a big part of me thought that having the two teams separated by a few garages isn’t a big deal. The cars wouldn’t be too far away.

“But then there’s also the side of me that liked the fact that we were all working together as one unit and keeping it as close as possible.

“We had a big disadvantage this year of being the last team in pit road, which is something that we never want to do again, but worst case scenario for next year, we were going to be third and fourth, so we’re in a pretty good situation, regardless.”

“It shouldn’t be the end of the world for us,” he said.

“I believe we’re going to keep the same structure where we all share the same truck – engineers and drivers. It’s not too far away. The opportunity to run the first garage is a great one.”

There are other major changes up and down pit road, mainly due to the unprecedented amount of Racing Entitlement Contract sales that has occurred in the last few months.

Also in the three-car grouping, Brad Jones Racing and Dick Johnson Racing will share a pit boom, having both expanded from two to three cars in the REC shake-up.

Lucas Dumbrell Motorsport and Tony D’Alberto Racing will share a pit boom, located in the middle of pit road.

Below is the order that the V8 Supercar teams will occupy next year’s pit road.