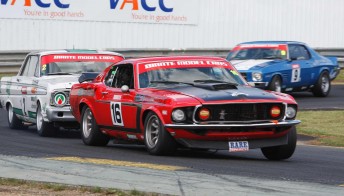 The Touring Car Masters has announced a return to an eight-round championship with the release of its official 2010 series calendar.

Seven of eight rounds will run on the V8 Supercar calendar, with the series to kick off at the Clipsal 500 in Adelaide in March and wrap up on the streets of Sydney with the at Homebush in December.

One event still needs to be confirmed on the calendar, with the notable absence of the Muscle Car Masters at Eastern Creek.

In addition to popular regional events in Tasmania, Victoria and the Northern Territory, the Touring Car Masters’ iconic muscle cars will once again be a huge draw card at Mt Panorama supporting the legendary Bathurst 1000 event.

“We are extremely pleased with the makeup of our 2010 series calendar – it’s a strong, balanced mix of high profile events,” said category chairman Chris Stillwell.

“The Touring Car Masters is going from strength to strength. We have increased from five rounds with V8 Supercars this year to seven, with the remaining eighth round still under negotiation.

“No doubt a major step forward for the series for 2010 is the television package that we have negotiated with V8 Supercars TV. Currently, the package is proposed to be a combination of live race action and magazine-style programming.”

The Touring Car Masters has also secured six rounds of television coverage to be aired nationally on Channel 7.