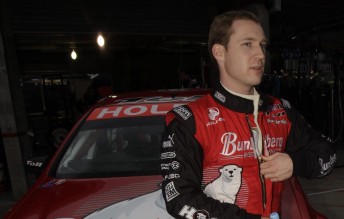 David Reynolds is using the recent news that he won’t drive for Bundaberg Red Racing next year as motivation to get back into the series – and tick some career boxes at the same time.

The Albury-born star was one of the stand-out V8 Supercar drivers in the latter rounds of the series, but was informed last Wednesday that he would not be required ‘full-time’ at the Walkinshaw Racing team – replaced by Andrew Thompson.

Reynolds will drive for the Bundy Red-backed team in the endurance races, however, wants to find more racing activities to sink his teeth into during the year to keep him race fit.

The 24-year-old said that while he was disappointed he wouldn’t drive full-time, there are other activities that will keep him busy during the year before a planned return in 2011.

“I’m looking around to see what’s going to be best for me,” he said.

“Right now, I’m just disappointed that I won’t be able to continue on my recent form. I’ve had a fantastic year, meeting a lot of great people from Bundy and Holden, and I’ve become a better person for it.

“I’ll be doing the endurance races with Walkinshaws. They’ve given me a great package. I’m going to look forward to doing that.

“I’d love to race those guys again in 2011. If I can do that, I’ll probably be more aware of what’s going on. I think I’ll have the ability to hit the ground running as well, knowing what to look for with the car and how to make it better for me.

“Besides V8 Supercars, I’ve still got the New Zealand Porsche stuff to do, and I’m going to try and do as many other racing categories as well. It would be good if I could get into 24 Hour racing.

“It would be great to be able to do some international racing and tick a few more career boxes.”