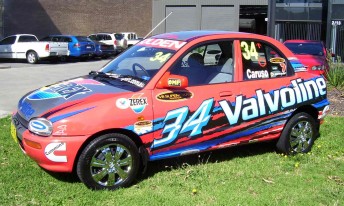 Is Mazda on the brink on coming into V8 Supercars? Not with this car!

It’s a busy time for V8 Supercar teams … or is it?

Garry Rogers Motorsport is in for one of its toughest off-seasons of all-time. The Victorian-based team is building a new VE Commodore, it’s painting every body panel in the shop to accommodate new naming-rights sponsor Fujitsu, and to top it off, the season starts in less than 10 weeks!

But all this hasn’t stopped the GRM crew from having a little Christmas fun with team driver and Sydney Telstra 500 podium finisher Michael Caruso.

When he returned to the shop this morning, it had a new livery.

The team has fully wrapped the 121 with the left over stickers from this year’s Vavoline Bathurst car – and the’ve done a pretty damn good job of it!

“I left at four o’clock yesterday afternoon, and I noticed a few of them staying back, but I didn’t really pick up on it,” Caruso told Speedcafe.com.au today.

“They said that they stayed around until 9.30pm last night, had a couple of beers and this is the result.”

One might think that being a 26-year-old man, whose occupation is being professional race car driver, might have a slightly more modern, performance road car.

Not Caruso. He’s happy with his ‘A-to-B’ machine. Well, he was up until this morning …

“That’s my beast,” he says with a touch of pride.

“I haven’t driven around town yet, but I’m sure I’m going to be pretty embarrassed. I’m not sure what I’m going to do with it.

“There’s no doubt that the 121 is a great little car. Mazda don’t give me anything, but with this, I think they should now! I seriously haven’t done anything to it for the last three years and it still runs around.

“I think, though, given the body shape of the vehicle, the new scheme will only assist the aerodynamics of the car. It will no doubt now be a faster and safer road car!”

Apparently, the Valvoline Cummins Mazda 121 is now parked out the front GRM’s shop with a sign on it that reads “For Sale ­– $5000.”

While the GRM crew enjoy its Christmas prank, there’s a lot going on at the Dandenong team’s workshop.

“All the cars are completely stripped at the moment getting painted inside and out,” Caruso said.

“We’re testing on February 8, so we’ve got to get both my car and Lee (Holdsworth’s) car completely stripped, get them back together and get them ready for test.

“There’s going to be some big nights ahead.”