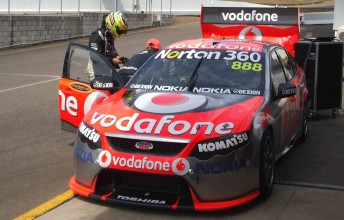 The 2008 Australian Formula 3 champion completed a handful of laps in Craig Lowndes’ #888 Falcon – the last time the team will be seen in Fords before it unveils its new-for-2010 Commodore VEs.

Also present on the day was Marcus Marshall and James Moffat, who drove with the Vodafone-backed Queensland squad.

Winslow, who made his V8 debut on the streets of Sydney in the Fujitsu V8 Series two weeks ago, was pleased to get the opportunity with the sport’s number one team.

“It was a last minute thing – they said do you want to do some laps “I said hell yeah!” he exclaimed.

“I was down to test with them on the day that Troy Bayliss tested with them earlier in the year, but I had a schedule conflict.

“When this opportunity came up, it was great. It was only a ride day, but it’s a chance to get my foot in the door and hopefully get another run in the future.”

Winslow’s plans for 2010 remain in trying to secure a Fujitsu V8 Supercar ride, and hopefully, a good seat in the endurance races.

“I’m trying to do Fujitsus – I really enjoyed Homebush,” he said.

“We had a clutch brake and some small issues, but I really enjoyed the racing. It was different to the single-seaters that I’ve been used to. You can really get stuck into it – hoping over kerbs and stuff.

“I’ve got a few things ticking away. I’m definitely talking to Jay Motorsports. They do a very good job and I thought the car was really good. For me, it all comes down to the money and sponsorship and I’m working on a few things now.”

Besides his quest to race in V8 Supercars next year, Winslow will commute between and Australia and the United States next year as he is involved with a USF2000 team. The series (America’s version of Formula Ford with wings and slicks), is now sanctioned by IndyCar, and Winslow will be helping train a driver, plus compete in races himself.

The first event that he has will be at Sebring on New Year’s Eve before the first round of the season proper at the St Petersberg street race.