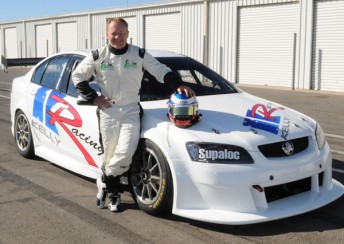 Jason Bargwanna has had his first drive of a Kelly Racing Holden Commodore at the team’s end of season ride day at Winton Motor Raceway on Monday.

Bargs drove the team’s Chassis PE047 in a white testing livery, driving approximately 100 laps to get an initial impression of the team that he will join in 2010 after driving for Sprint Gas Racing this season.

Bargwanna, a two time event winner at Winton, was impressed with the Kelly Racing operation in his first day on-track with the team.

“I was very excited to actually get a taste for the car, how it drives and just see how it is that they go about getting the cars right and being competitive and I was very impressed with package so far,” said Bargwanna.

“What impressed me the most is the way the guys all work together, the communication level. It’s fantastic and I really think that this is certainly a team that’s got the credibility to do the job.”

While only a ride day and not a full-blown test day, Bargwanna was still impressed after his initial taste of a Kelly Racing V8 Supercar.

“I think over the day I’ve done probably 100 laps in terms of rides,” said Bargwanna.

“Obviously it’s hard to evaluate the cars with a passenger on board but my initial impression is that they’re impressive and that they’ll be competitive.

“The engine impresses me and there are a couple of different little things with the front geometry which seem to make the car work quite well so I’m really looking forward to having a proper attack at it.”

Rick Kelly, who shared driving duties with brother Todd in the other car present (Chassis PE045), said that is was important for the team to being working with Bargs as soon as possible as to hit the ground running next season.

“It’s good on a number of levels,” said Rick Kelly.

“Firstly, just for all the guys to get to know Bargs and to have a chat to him and experience what it’s like to work with him at a track is good.

“It allows us to hit the ground running next year.

“Also, to get Jason in the car and feel what it’s like to steer one of our rockets around on a typical Winton in greasy conditions, it’s been good for all of us.

“We’ve all bonded quite well and we’re all pretty excited about next year and we already feel like we’re a team that’s worked together for a while.”

A team statement said that Kelly Racing will unveil details regarding Bargwanna’s car and the team’s fourth entry for 2010 at a later date.