Narrowest of wins in TIMC Enduro

Narrowest of wins in TIMC Enduro 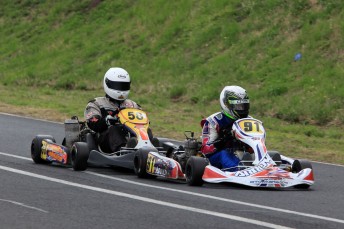 Zane Wyatt crossing the line ahead of Mitch Cuzens for victory in the 2009 TIMC Enduro. Pic: photowagon.com.au/Carruthers

Wyatt fended off the challenges from rising star Mitch Cuzens over the final half an hour of the journey to claim the victory by an amazing 0.070 seconds at the end of the four and a half hour race.

“Today was just a amazing day, undoubtedly one of the most challenging races that I’ve competed in,” said Wyatt, who shared the driving duties with Mitchener in a Leopard-powered Arrow.

“In the end I was doing everything possible to hang on, I wasn’t going to give in easily as we’d battled too hard for four hours to throw it away in the last part of the race.

“To complete 30 laps around here in a race is a pretty physical deal but when you do around 140 laps in a day it really tests you. In saying that though, I’m really looking forward to next year’s event already.

“I’d like to thank Lee and all of his crew for giving me the opportunity to come over to the ‘big smoke’ and race.”

Adam Willison and James Sera were the quiet achievers of the day to finish in third spot aboard their IAME X-30 powered Azzurro.

The two ‘super teams’ were both out before half race distance. For the second year in a row Sera and Treseder had their campaign end due to a mechanical failure (lap 106) and when Wall broke a chain on lap 129, which resulted in it being lodged in the radiator of his Rotax engine, he and Price were out.

Remo Luciani and Shayne Piper were in a position to fight for the outright win but when Piper and Adam Lindstrom had an argument over a piece of road while battling for third place it resulted in both karts spearing off. After some lengthy repairs in the pit area both drivers were able to return to the circuit, albeit several laps down on the leaders.

Luciani and Piper claimed the win in the Masters division by recovering to finish eighth outright in their IAME X-30 powered Monaco.

The defending winners of the Masters section, Steve Smythe/Mark Wicks, finished second (11th outright) about their Rotax-powered Arrow kart. It was the third consecutive year that the pairing has finished inside the top two in the Masters category.