V8 co-driver market in a flurry

V8 co-driver market in a flurry 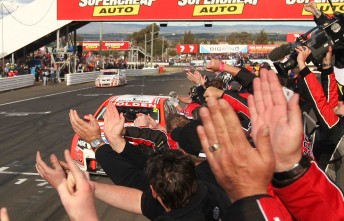 Car #2 Tander/Davison leads #8 J Richards/McConville across the line at this year's Bathurst. Could McConville be in #2 next year?

Confirmation that ‘Primary’ drivers in the V8 Supercars Championship Series won’t be able to drive together in the endurance races has sparked a flurry of activity in the co-driver market.

First man to secure a deal is Cameron McConville, who has been signed by Walkinshaw Racing for the L&H 500 at Phillip Island and the Supercheap Auto Bathurst 1000.

McConville could drive for any of Walkinshaw’s four cars (Toll HRT and Bundaberg Red Racing), although it could be presumed that he will drive for HRT – partnering either Garth Tander or Will Davison.

It is also expected that 2008/09 HRT co-driver and endurance specialist Craig Baird will be retained by the Walkinshaw Racing organisation. Walkinshaw Racing also announced yesterday that it has retained the services of David Reynolds as an endurance driver as part of the team’s confirmation that Andrew Thompson will take Reynolds’ full-time seat in the Bundaberg Red Racing squad.

With McConville done and dusted, the next big name to drop will be Mark Skaife. The five-time Bathurst champion proved that a year out of the seat did little to slow him down, helping Greg Murphy to fourth at Bathurst this year – and if things had gone their way that day, Murphy and Skaife could have won …

Skaife’s top performance at Bathurst, his supreme pedigree at the famous race and his off-track pull puts him now at the top of the list for leading teams to sign up.

Skaife is an independent member on the V8 Supercar Board, but he abstained from the vote (regarding Primary drivers and their roles in the long distance races) as he’s likely to participate in the endurance races.

One thing is for sure, though – if Skaife races in the enduros, he will drive a Holden. Given Skaife’s recent history in the sport, it’s unlikely you’ll see him in the Walkinshaw Racing stable, so could he drive for Holden’s newest outfit – TeamVodafone?

Skaife and Craig Lowndes in the #888 Commodore VE in 2010 would be great on the track, as well as off the track.

It’s just a thought, but a very tasty one …

What do you think of the new endurance driver ‘pairing’ rule? To VOTE NOW in Speedcafe’s online poll just CLICK HERE