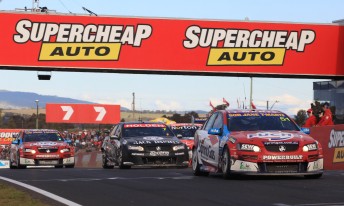 The #51 Greg Murphy/Mark Skaife entry was the best of the 'non-regular' combinations, finishing fourth

The V8 Supercar Board has passed the rule that will prohibit full-time drivers from pairing up at the endurance races – the L&H 500 at Phillip Island and the Supercheap Auto Bathurst 1000.

The rule will restrict regular Championship Series drivers from being paired in the same car for the two-driver races.

Speedcafe.com.au spoke to a number of teams and drivers regarding the split driver rule, and while none would go on the record until V8 Supercars Australia makes an official announcement, opinions are divided amongst the ranks.

One driver that Speedcafe spoke to said; “I can’t believe this has been passed. It has to be one the worst decisions I’ve ever heard in the sport. It’s a joke.”

Another team driver said; “I can see why they’ve made this decision. It’s a decision for the sport and for the fans, but it’s certainly going to place a premium on co-drivers.”

WHile the rule has been passed, there is talk in the V8 community that the new rule may allow regular championship drivers to pair up in the team’s lead car if only one driver is eligible to score points at the endurance events.

The decision also means that the last two combinations to win at Bathurst will need to split for the 2010 edition of The Great Race, those of course being Jamie Whincup and Craig Lowndes of Team Vodafone (2006-08) and Toll Holden Racing Team’s Garth Tander and Will Davison (2009).

The market for experienced, fast paced co-drivers is already reportedly hitting overdrive, with some part-timers set to earn some big salaries as the top teams look to lock in their endurance combinations early.