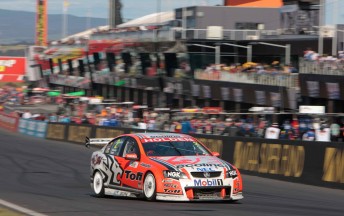 Garth Tander and Will Davison won the 2009 Supercheap Auto Bathurst 1000. Tander rates it as his season highlight

Toll Holden Racing Team driver Garth Tander has labelled this year’s Bathurst 1000 as the highlight of his 2009 season.

The 2007 V8 Supercar champion finished third in this year’s championship chase behind team-mate Will Davison and back-to-back series victor Jamie Whincup, and while he would have loved to have been in a better place to fight for the title, he told Speedcafe.com.au that Bathurst still remains the big carrot in the sport.

“After the race, I said at the time that I’d won it very early in my career (2000 with Jason Bargwanna). It was the first time that I’d finished the Bathurst race, and I won it, and at the time, I didn’t appreciate how difficult it is,” he said.

“Since them I’ve had a lot of good cars and lot of really good team-mates and haven’t got results, so to finally get one again means a great deal.

“I don’t think this year’s race meant more, but I certainly appreciate the gravity of it more now, its standing in the sport and its standing in Australian sport in general” he said.

“I think I just understand it more now.”

While Bathurst was the Tander’s stand-out, there was no overall championship success for HRT – and it’s something that the team hasn’t won since the end of Mark Skaife’s dominance with the team in 2002.

Until next year, the championship can wait, but regardless, he was pleased with 2009 as a whole.

“Certainly, results wise, we ticked some big boxes this year,” he said.

“The Phillip Island victory, the Bathurst victory certainly stands out, pole position and winning the first race in Sydney was great, finishing third overall is nice, and wrapping up the Team’s Championship was good as well.

“From a team point of view, I think we achieved nearly everything there is to be achieved. The individual goal of the championship is obviously something that we all want, and that’s something that burns brightly for me.”