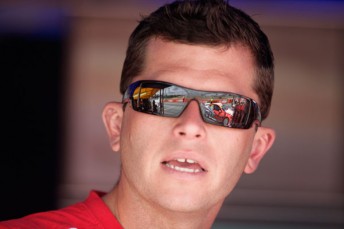 This year’s Bathurst winner Garth Tander is the latest V8 Supercar driver to slam the new rule that forces teams to separate their lead drivers for the endurance events at Phillip Island and Bathurst.

Jack Daniel’s Racing driver Todd Kelly was quoted in today’s Herald Sun newspaper saying that the new rule forcing full-time V8 Supercar drivers to split for the endurance events was ‘the most ridiculous rule I’ve heard in my life’.

Now Tander, who along with Will Davison won Holden its first Peter Brock Trophy in October, has told Australian Associated Press (AAP) that the new rule is ‘absolutely stupid’.

“I can’t see the reasoning behind it. All I can see it doing is increasing the costs for everyone involved …

“It denies Will and I the opportunity to defend our title and we’re obviously very disappointed about that.”

V8 Supercars Australia Racing Entitlements Contracts (REC) owners have been informed that a Primary Driver is not permitted to compete under more than one REC in the same calendar year, unless specifically approved by V8 Supercars. A Primary Driver means the Driver who is entered to drive a Car at the first Sprint Round of the Season.