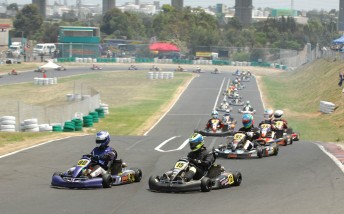 The start of the 2007 kart enduro at TIMC complex, Port Melbourne

Eighty of Australia’s best kart racers will compete in this weekend’s TIMC Enduro.

The third annual end of season charity enduro will see over 40 teams of two drivers each compete for four and a half hours at the TIMC complex located in Port Melbourne, Victoria this Saturday.

Organised by one of Australia’s most successful kart racers Matthew Wall, the event is designed to provide an opportunity for drivers to enjoy the sport in a fun, enjoyable and relaxed environment.

“At all of the championships throughout the year everyone is pretty focused on winning, this event is more about putting the fun back into the sport and making sure that everyone has a good time while raising money for the Royal Childrens Hospital,” said Wall.

Two of the teams expected to figure prominently in this weekend’s enduro is the David Sera/Kel Treseder combination and the Matthew Wall/Shane Price entry. Between them, this quartet have won an amazing 25 National Championships.

The inaugural event in 2007 was by the Victorian pair of Josh Arandt and Daniel Rochford. The winning pair completed 238 laps of the 1km circuit over the four-hour period.

Last year, the race was held in extremely wet conditions. Aaron Ivermee and Jordie Lindstrom finished ahead of the Price brothers – Bart and Shane.

Speedcafe.com.au will be represented in the race by news engineer Grant Rowley. He will be partnered by Motorsport eNews editor Andrew van Leeuwen.

If conditions remain dry, it will be the first time that the event has been run over a four and a half hour period.

The TIMC Enduro, which begins at 12:30pm, will be proceeded by a Vintage kart demonstration, Junior Enduro and a 30-lap Clubman feature race.