Dane: I hope this isn’t the high point

Dane: I hope this isn’t the high point 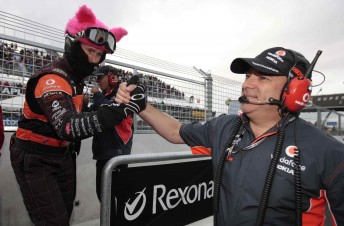 Triple Eight Race Engineering boss Roland Dane says that this isn’t the high point in his team’s existence – because he hopes the best is yet to come.

After wrapping up his second-consecutive V8 Supercar Championship Series with Jamie Whincup, Dane told Speedcafe.com.au that with his impending switch from Ford Falcon to Holden Commodore chassis means there’ll be challenges, but he doesn’t want it to rest on his team’s laurels.

“I really hope that this isn’t the high point. I hope we can carry on at an even better level,” he said.

“It’s just a question of continuing what we do. For sure, with Holdens, we want to have at least as much success as what we’ve enjoyed in the last five years, absolutely.”

Three Bathurst 1000 wins and two championships in a four year period would generally lead a team boss to say that his team is in the best shape of it’s life, but Dane’s worldly experience gives him a different view.

“I wouldn’t say so necessarily (that this is the best period for Triple Eight),” he said.