Ryan Simpson steps up to Sonic

Ryan Simpson steps up to Sonic 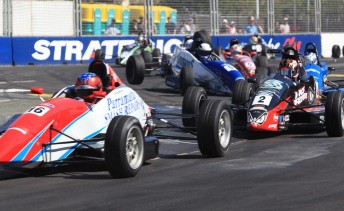 Simpson will join current driver Geoff Uhrhane in the three-car Mygale team, with the third driver to be confirmed soon.

The New South Welshman contested this year’s Formula Ford title for Spectrum team Synergy Motorsport. Now, he steps up to the Champion team.

“We’ve kept a close eye on him for about 12 months when he did one or two races at the end of last year and he was impressive straight away,” he said.

“Our opinion on him, since then, hasn’t changed at all. (Nick) Percat commented to me many times that he thought he’d do a good job in one of our cars.

“He had a run with us at Winton a couple of weeks ago, and he was good as gold. He settled into the car and the team quickly. It certainly suits the way he drives, more so than what he’s been in for the last 12 months.

“Essentially, we now have two second year guys. Geoff’s had a good rookie year, but it’s time to step up to the plate. He’s now the most experienced guy in our team. I know he’s looking to step it up.”