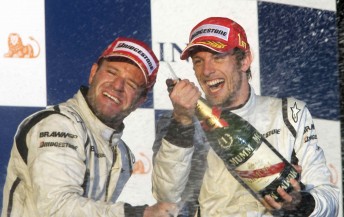 Will Rubens Barrichello and Jenson Button be around in Formula 1 when ONE's F1 deal runs out in 2015?

The new agreement commences in 2011 and extends through to the conclusion of the 2015 world championship season.

The agreement with Formula One Management provides Network Ten live and exclusive coverage of all F1 races. The deal involves an increase in annual broadcast content and also covers all online, mobile and IPTV rights.

“Formula 1 has always had a large, passionate and loyal following in Australia,” he said.

“With Mark Webber’s two great wins this year, along with the emergence of several exciting new franchises challenging the ‘old guard’, Formula 1 is attracting a legion of new fans.

“We are delighted that our extended relationship with Formula One Management will cement ONE’s place as the home of Formula 1 on Australian television.”

All Formula 1 races throughout the season will be broadcast live on ONE, the Network’s 24-hour digital sports channel, with delayed coverage on TEN. Qualifying sessions will also be seen on ONE.