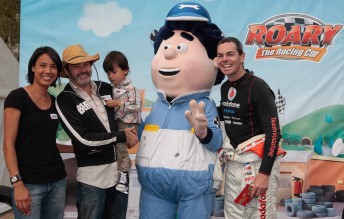 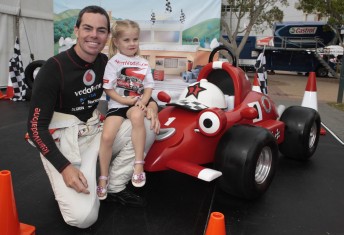 Roary the Racing Car was given one of its first Australian public engagements at the Sydney Telstra 500, entertaining families at Sydney’s Olympic Park with special celebrity guests.

The Sydney engagement was held to celebrate the launch of Lowndes’ character ‘Conrod’ that will debut in selected episodes of the second season of the children’s cartoon program.

Roary the Racing Car will be seen in Australia next year, starting on January 29 on the ABC Kids free-to-air channel.

Lowndes has already put his voice to three episodes of the popular UK-program which is narrated by Formula 1 great Sir Stirling Moss. Former F1 commentator Murray Walker will also make cameo performances in the coming series.

Conrod is the big throaty Aussie V8, that uses typical Australian phrases such as ‘Beauty mate,’ and ‘no worries.’

Roary the Racing Car is broadcast in over 100 countries.

The program is a BAFTA-nominated pre-school series, designed and developed by Keith Chapman (Bob the Builder).