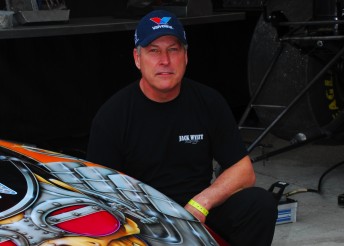 A cargo ship is currently en-route to Australia from California carrying the freight of Wyatt and fellow USA racer Gary Densham.

Included in the container and nine pallets the crew will unload from the ship later this month are both Wyatt and Densham’s Nitro Funny Cars, four motors (for Wyatt’s car alone), rods, pistons, Valvoline oil, eight clutch discs, three super chargers and 150 plus tools – and that’s just off the top of Wyatt’s head.

Wyatt and his son plus two crew members recently spent two days packing the equipment for shipping, after driving 1800 plus miles from their base in Iowa.

“It is a massive undertaking but we couldn’t be happier to be coming over to Australia – there are plenty of spares, tools, and of course our Nitro Funny Car, as well as Gary’s Nostalgia Funny Car, now on their way across the seas and the team will arrive late December to complete the final preparations,” said Wyatt.