Question: Why did Jonathon Webb win the 2009 Fujitsu V8 Supercar Series? Answer: He won six of the final seven races of the year.

It’s a relatively simple equation, but that’s what it came down to in this year’s V8 Supercar development series.

Webb, driving the MW Motorsport-prepared Gulf Western Oil Ford Falcon BF, dominated the latter half of the season, overcoming a strong early challenge from James Moffat and a late flurry from David Russell.
The Gold Coast-resident sealed the title in Saturday’s first race after he finished

In Race 2, Webb trailed Moffat throughout the opening laps before snatching the lead and ending the series on the perfect note.

“I must say the Championship win came a bit earlier than I expected,” Webb said.

“I saw Dave Russell pushing pretty hard yesterday and he had a bit of tough luck. It didn’t work out for him and it’s made my life a little bit easier for the rest of the weekend. You don’t wish that upon anyone but at the 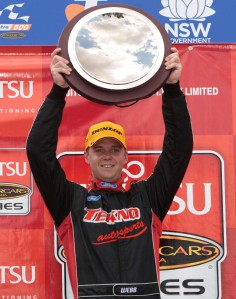 end of the day it takes the pressure off my shoulders.

“Coming in this year, we were probably one of the favourite to go out there and sit on top. It was a little bit slower than we wanted it to be. It took a little time to get comfortable with the car and for the team to gel together. But towards the latter part of the year it all worked really well.”

“I would have won seven straight had it not been for Moffat’s win yesterday. It’s been a good run towards the end of the year and it’s great to finish on top.”

“We tried to do that for this year and couldn’t quite out it all together. We’ve worked quite hard over the past few months and we’re really looking forward to it.”

Moffat took second in the series in his Norton 360-backed Falcon ahead of Russell, while Grant Denyer finished third in both Fujitsu Series races in Sydney, cementing his fourth spot in the final standings ahead of Daniel Gaunt.