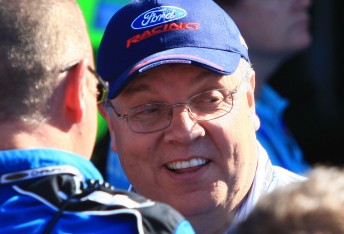 Ford Australia President Marin Burela has outlined a new deal that will see all of Ford’s V8 Supercar teams receive varying levels of support next year.

Burela was at the Sydney Telstra 500 last weekend – only the second V8 Supercar race he has attended.

However, he told Speedcafe.com.au that the Ford Motor Company’s commitment to the sport is unquestioned and the level of backing will be changed in 2010.

“At Ford, we are totally committed to the sport and we are going to be there.

“We’re committed to help all of the Ford branded teams and vehicles in different ways. We haven’t decided what we’re doing in terms of 2010. We’re working on a variety of things.

“The most important thing for me to say is that we’re committed and we see it as being an important way that we market our product.”

It is understood that a decision on the financial and technical assistance that Ford will offer will be known in the coming weeks. Speedcafe expects that Ford Performance Racing and Stone Brothers Racing will play an even tighter role together, and Dick Johnson Racing remains in the running to get back on Ford’s books after the legendary team lost its factory support at the start of this season.

New Ford team Triple F Racing (single-car entry for Dean Fiore) will have a parts and product deal next year.

Only 10 Ford V8 Supercars will be on the grid next year, taking on 19 Holden Commodore VEs.