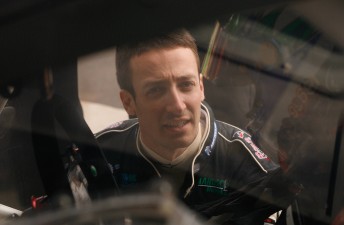 The West Australian has purchased the ex-Fabian Coulthard Falcon FG that the Wilson Security Racing driver took to a podium place at Symmons Plains in May this year. Coulthard also finished fifth in the final race of the year at the Sydney Telstra 500 yesterday.

The car, owned by Gray Matthias, was loaded into the back of Fiore’s transporter at the conclusion of the Sydney Telstra 500, bound for the Triple F Racing’s Gold Coast team-base.

The Ford Motor Company has already pledged some support to Fiore, offering him a panel and parts deal.

Fiore was planning to starting the 2010 season in the ex-IntaRacing Falcon BF, but will now campaign the Triple Eight-built FG for the entire season.

Triple F Racing will keep the Falcon BF that he’s raced this year and use it as its possible Fujitsu V8 Series entry next year for brothers Paul and Todd.

Fiore will be one of just 10 Ford Falcons in the field next year, joining the three car teams of Ford Performance Racing, Stone Brothers Racing and Dick Johnson Racing. He told Speedcafe.com.au that Ford was very responsive to his one-car entry.

“The reason I’m excited about it is that Ford has jumped on board straight away. We’ve got support in terms of parts and panels already. It’s something that we hadn’t experienced from Holden,” he said.

Fiore also acknowledges that the ex-Coulthard car is a good piece of kit.

“It’s a good car, but it’s also had a good driver behind the wheel – he’s obviously no slouch,” he said.

Fiore has secured ex-PCR staffer Greg Wooster as his team manager, and is likely to sign Coulthard’s 2009 engineer Leigh Geyer as his main man in pit lane.

In terms of major sponsorship, Fiore is hoping that a deal will be in place soon.

“I haven’t signed anyone yet, but I’m got a few people at a principal level which definitely helps along the way,” he said.

“It just leaves us trying to find a major backer for next year.”