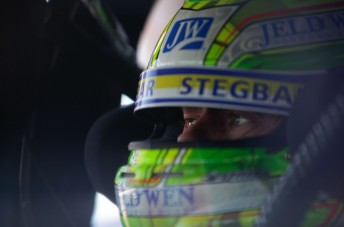 In a race of attrition, James Courtney won the final race of the inaugural Sydney Telstra 500 today.

The #18 Jim Beam Racing driver avoided the carnage that unfolded around him to secure his second outright win in his V8 Supercar career.

It was a timely win for the Jim Beam-backed Dick Johnson Racing team. Ford Australia President Marin Burela was present at the Sydney street track, and with the famous team in heavy negotiations to become a ‘Ford-backed’ again in 2010, the win couldn’t have come at a better time.

“Marin stuck his head in the window before I went out and said good luck. I told him I’d do everything I could to get Ford on the top step and we managed to do that,” Courtney said.

“For him to be here and for us to get the result, it was everything that we wanted. We can only do with what we’ve got. To get more money is only going to help us and be faster. I’m really looking forward to it.”

Courtney finished ahead of Michael Caruso in a mixed day for the Valvoline Commodore team. Caruso’s team-mate Lee Holdsworth again looked like a winner on the Sydney streets, but a crash at the notorious turn eight saw him end the race before the half race distance.

Caruso, however, was stoked with his second V8 podium finish.

“We had to change the motor last night and we couldn’t get the most out of it in qualifying, but we had a good set-up today in the race and it showed,” he said.

“My strategy was to keep it off the walls, though I did slap a few. It’s a real hard track and it takes a lot of concentration to do a good lap … to do 74 laps.”

In the old ‘combined’ weekend format, Winterbottom would have been the ‘round’ winner after his podium yesterday. 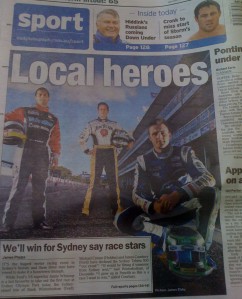 Predicting the future? The Daily Telegraph ran this image as their back page story on Saturday

“It’s a great effort from the guys. They supplied me with a reliable car – I did my best not to make it reliable! Two podiums this weekend, what more could you ask for? A win would have been better, but the other two guys did a great job.”

All three podium finishers were born and bred Sydney boys, and in a touch of irony, the three of them were featured on the back page of Saturday’s The Daily Telegraph.

Will Davison’s eighth place was enough to secure the Toll Holden Racing Team with the Team’s Championship, edging out TeamVodafone.

While there were celebrations for some, there were nearly more cars who didn’t finish compared to who started.

Jason Bargwanna was involved in a heavy clash with the Bing Lee-backed Commodore of Dean Fiore. Jack Daniel’s Racing also had a shocker. Rick Kelly was inside the top three in the opening laps until he crashed heavily at turn eight. A few laps later, his brother and team-mate Todd hit the same wall. Battery failure eventually sidelined him.

Cameron McConville, Mark McNally and Michael Patrizi were others to taste the turn eight wall.

New series champ Jamie Whincup started from 26th place after engine problems in qualifying and hit the wall in a ‘rookie’ mistake with cold tyres.