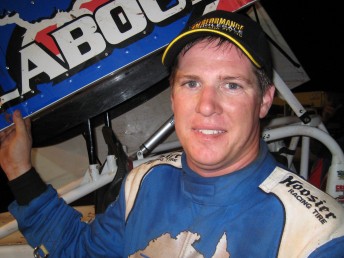 American Jason Johnson broke through for his first win at the Tyrepower Parramatta City Raceway during round three of the 2009/2010 Performance Wholesale World Series Sprintcar Championship this evening.

After missing the opening round of the championship due to commitments in America, and having a terrible run of luck in last weekend’s event in Toowoomba, Johnson was keen to make amends for his new team owner Alan Haynes this evening.

The Louisiana native qualified fourth fastest before becoming the top pointscorer courtesy of fourth and third place finish in his heat races. Johnson then lined up alongside rising star Danny Reidy on the front row of the A-Main after setting the second fastest time in the top eight shootout.

Reidy got the jump at the start of the race ahead of Johnson and reigning Australian Champion Garry Brazier. While this trio went at it at the front of the field, much of the focus was further down the order with championship contenders Robbie Farr and Brooke Tatnell starting well down the order.

Following the second caution period, caused when Grant Anderson stopped on the exit of turn four, Brazier relieved Johnson of second place and appeared to be closing in on the race leader. However, Johnson had other ideas as he found another groove on the racetrack to manoeuvre a way back past Brazier and before setting his sights on Reidy.

Following several laps of running wheel to wheel with the race leader Johnson found a way past in the middle of turns three and four with seven laps remaining before powering on to record his first career victory at the famous Sydney venue.

“I’ve been coming here for seven years now and finally I’ve got a win, it is a great feeling. It is very pleasing to win here for a new team with Alan Haynes but also I owe a lot to Darren Disbury and the crew I had been with for the past six years,” said Johnson.

“We really went from zero to hero in a week. Last week I felt as though we had some good car speed but got caught out in my heat race and ended up crashing out in the B-Main, tonight this speed turned into a win.

“During the early part of tonight’s race I was running around the top but when Brazier went past me in the middle I thought it was time to start moving around on the race track.

“I then moved to the middle, and also went to the bottom for a bit, all which gave me a bit more speed and got me to the lead.”

Reidy held on for second place ahead of Brazier, Ryan Farrell and Cameron Gessner.

After being forced to change two rear ends, an ignition box and power steering pump during the evening, Farr was the big mover in the A-Main aboard the Orrcon Steel-backed East Coast Pipeline entry to finish in ninth spot. With a handful of laps remaining in the main event he was running as high as fifth, an impressive run from his 16th starting spot.

Despite finishing in 14th place this evening, Brooke Tatnell continues to lead the championship standings by two points over Max Dumesny with Farr a further two points in arrears.