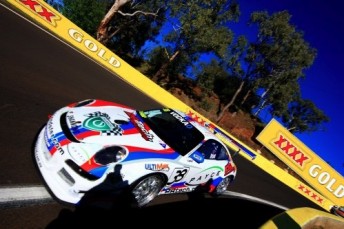 Driving his PR Technology Racing Porsche GT3 997 Cup S, Wall already has one hand on the crown, needing only to finish the races (both on Sunday) to win the title.

If Wall is successful in taking the crown, it will seal a unique honour for the family. David’s father Des recently won the 2009 Australian Sports Sedan title, which would make it dual Australian national championships in the one year for father and son.

It will also be the first time in the past four seasons that the German marque has had victory in the Australian GT Championship. Greg Crick (Dodge Viper ACR), Allan Simonsen (Ferrari 430) and Mark Eddy (Lamborghini Gallardo) have won the past three titles respectively. Bryce Washington won the inaugural GT title in 2005 in a Porsche 996.

Behind Wall, the chase for second place is a close affair. James Koundouris in the Supabarn Supermarkets Porsche Cup S, Jim Richards (Shannons Insurance Porsche GT3 997 Cup Car), Ross Lilley (Laminex Dodge Viper GT3) and Dean Grant (Vodka O Lamborghini Gallardo GT3) are all keen to get an advantage before they drop their worst round results.

Twenty GT Championship cars have nominated for the Homebush event, including Shane Smollen making his GT debut in the ex-Koundouris Porsche 997 Cup car (backed by McGrath Estate Agents) and Dave Stevens making a return in the Brennan Voice Data & IT Ferrari 430.

Points leader in the GT Challenge title chase, Jordan Ormsby (Porsche GT3 996 RS) might be leading the class, but a lot of the Sydney focus will be on Hollywood actor and racing nut Eric Bana.