A special Sydney honour for Brabham

A special Sydney honour for Brabham 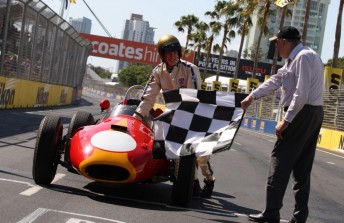 Sir Jack Brabham will be honoured at this weekend’s Sydney Telstra 500, celebrating the 50th year since the first of his three Formula 1 World Championships.

Sir Jack, 83, and his wife Margaret will be special guests of V8 Supercars Australia at the Sydney Telstra 500 in a rare reunion of most of the family including sons Geoff, Garry and David who will be joining three generations of Brabhams.

Sir Jack is the oldest surviving Formula One world Champion.

Included in the party are grandsons Matthew, Finn, Sam and Jayson as part of an extended family that have congregated in Sydney from all parts of the world for this special celebration of the life of Sir Jack and his enormous achievements in motorsport and business.

During the Sydney Telstra 500 spectators will get the chance to see Sir Jack’s legendary cars on display in The Dome where there will be a host of historic racecars including the Cooper T51, Brabham Speedcar, Brabham BT24, Brabham BT6, Brabham BT11a and the Brabham BT35.

On Sunday of the event, a Brabham BT24 will be driven by grandson Matthew and a Brabham BT6 by son David as part of a tribute to Sir Jack. This will be followed by a convertible carrying Sir Jack, Margaret and grandsons Finn, Sam and Jayson.

David Brabham will also be competing at the Sydney Telstra 500 in the UberStar entry in MINI Challenge.