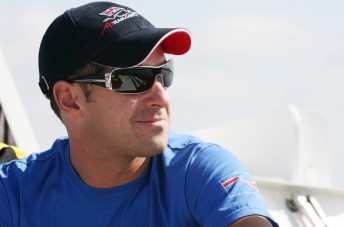 James Winslow will make his V8 Supercar debut this weekend at Sydney Olympic Park, but the British race driver has more than his one-off ride on his mind.

Winslow, the 2008 Australian Formula 3 champion, is hoping to enjoy a successful Sydney meeting in a Jay Motorsport’s Commodore VZ, with the aim to compete in the entire series next year.

“The whole plan is to try and get a professional V8 Supercar drive and turn it into a career over here, and this weekend’s race is the first step in that plan,” he told Speedcafe.

“I’ve been talking to a few Main Game teams and they’ve all told me that I need Fujitsu V8 experience, so this is the first step towards that.”

Winslow won last year’s F3 crown and tried to get a drive in this year’s Fujitsu V8 Series. When his efforts to raise the required sponsorship dried up, he went to America and competed in the Atlantics Series with moderate success.

Now, he’s back in Australia and committed to V8s.

“After winning the Australian Driver’s Championship, I still tried to go as far as I could in single-seaters,” he said.

“I raced in America in the Atlantics Series on a really short budget. I was quite pleased with the way that went, but I’ve realised to go any further is going to take millions of dollars in investment, so I’ve reached a point where the V8s are now high up on my priority list. With the position I’m in with my finances, I’m going to do my best to try and have a career in V8 Supercars.

“I’m hoping to have a good round at Homebush to gee up a few people to get them interested for next year. If I can make a strong debut there, it will have a better chance signing a deal with a good team.”

Winslow maintained that he would only do it if he could compete with a leading outfit.

“If I can be with a team that has an association with a Main Series team, you are immediately working towards that ladder to the top,” he said.

“I’m only interested in doing it properly. I’d only take an opportunity with a team that would allow me to be at the front of the grid.”