Rosenberg leaves F3 board to focus on V8s

Rosenberg leaves F3 board to focus on V8s 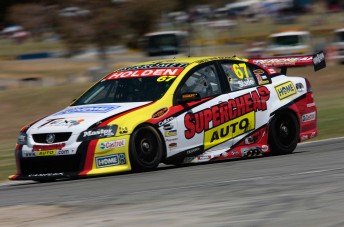 James Rosenberg has decided not to stand for re-election on the Australian Formula 3 board, electing to concentrate on his new V8 Supercar team.

Rosenberg recently purchased a Racing Entitlements Contract from Paul Cruickshank and will use it to enter Tim Slade in a third car at Stone Brothers Racing in next year’s V8 Supercar Championship Series.

Speedcafe understands that the deal between Rosenberg and SBR is already signed off and could be announced before the end of the week.

The South Australian businessman and keen racing identity says that he applied a simple logic to his decision to leave the F3 board.

“I’ve been there for six years. I was chairman for two or three years, and on the board forever. I think I did some good things there to be honest. It’s not easy in that category, but I’ve kept them strong financially, and that’s very important.

“I know numbers were very poor at the start of this year, but there’s talk of a couple of good young gun kids running next year – one could be (Mitch) Evans, plus a couple of others that I know. F3 won’t get 25 on the grid, but they’ll get 14-16, which is all you need for good, close racing.”

While Rosenberg is leaving his post on the F3 board, he still has a lot of racing assets. Rosenberg now owns a V8 Supercar REC, a Formula Ford (raced by Richie Stanaway this year), plus he owns the Paul Morris Motorsport Holden Commodore VE that Slade will use for the final time at this weekend’s Sydney Telstra 500. He is currently looking to sell that car.