Chassis swap for Kelly ahead of Sydney

Chassis swap for Kelly ahead of Sydney 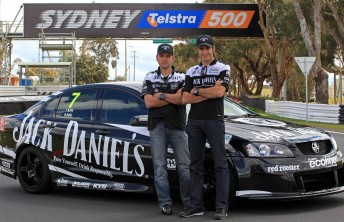 Jack Daniel’s Racing’s Todd Kelly will step into Kelly Racing’s spare chassis this weekend after his JDR Commodore was heavily damaged in a crash in Race 24 at Barbagallo Raceway recently.

Kelly was spun by Jason Bargwanna and later collected in the passenger door by Lee Holdsworth. The chassis is said to be nearly destroyed, but may be repaired during the off-season.

The replacement chassis (PE045) was originally built by Perkins Engineering in 2007 but will carry all of the team’s new Kelly Racing-developed parts on it this weekend.

“The incident wrecked basically the whole cage but didn’t really touch the front suspension or the diff housing so that will all slot straight into the old chassis,” Kelly said.

“At the end of the day it’s going to be fairly similar to what I’ve been driving, other than some little things like the seating position, which is a lot further inboard on our current cars compared to the car I’ll be in at Homebush.

“There are a few little things in the chassis, but I’m quite excited about seeing what I can do in the old girl.”

Todd says the future of his old Kelly Racing chassis PE049 is not totally clear.

“I think it will be repairable. It’s a big job,” he said.

“It’s come down to whether it’s easier and quicker to build a complete new car or repair that one and whether we can repair it so it’s identical to a brand new car.

“We think we can do that but in saying that, we need to get the crashed car onto the jig and have a proper assessment of it.”