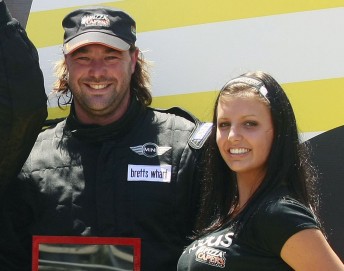 Ryan Hansford finished in the podium in MINI Challenge last month in his debut national circuit race. Now, he will drive a V8 Supercar

Ryan Hansford will make his Fujitsu V8 Supercar Series debut at this weekend’s season-ending round at Sydney Olympic Park.

The 27-year-old will drive the Rod Dawson Falcon BA in a one-off deal. The car was last raced by Todd Wanless at the Townsville street race in July. He tested it at Queensland Raceway last week – his first-ever drive of a V8 Supercar.

Hansford, the son of the late Gregg Hansford, has had very little motor racing experience. He has competed in Queensland’s Gemini Series for the year, before making his national circuit debut in MINI Challenge at the SuperGP last month where he finished on the podium.

Making the quick transition to V8 Supercars might sound like a big switch, but Hansford is keen to secure a career in the V8 class. He told Speedcafe that this is the first step to bigger and better things.

“I know it’s a big jump, but I felt comfortable in the car at the test,” he said.

“We weighed up running a Ute or running a MINI, but at the end of the day, if we get the budget to do that, we may as well try and run a Fujitsu car. That’s the way I want to go so I may as well get in there as soon as I can.

“It’s a good car, but it’s lacking a bit of development so it will be a second or so off the pace. I just want to prove that I can run around at a reasonable level and hope that people take into consideration that I’ve done bugger-all in cars.

“I’d like to do the Fujitsu Series next year, and my number one goal is getting a drive in the enduros – I want to race at Phillip Island or Bathurst.”

In other pre-Sydney Fujitsu news, a few late changes have occurred on the entry list. Sam Walter has committed to the final round after earlier announcing that he would quit the sport. He has elected to have one last run in his #47 Greg Murphy Racing Commodore VZ.

The second TAG Motorsport Commodore entry that was earmarked for Steve Owen has been withdrawn, along with the Mark Howard Falcon.