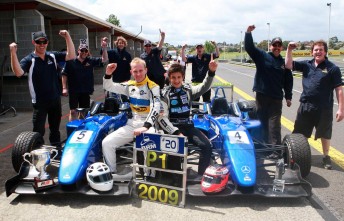 It is the first time in the Gold Star’s 51 year history that Englishmen have won back-to-back crowns (James Winslow won last year).

“I was pretty confident going into this weekend even though I was chasing Tim for the points, so to have this realised this afternoon feels pretty awesome,” Foster said.

“I knew if I could get a start on the front row we’d be in with a better than average chance – and how well we got off the line was going to decide it.”

Foster won the first race, with Macrow second. The title was decided in a wet Race 2, with Foster finishing second while Macrow slipped to fourth.

“I think we nailed the wet set-up so I pretty much pushed it as hard as I could,” the young Kiwi said.

“I knew Joey and Tim were racing for the championship so I didn’t try anything to radical but at the end of the day there was a race to be won and I wasn’t going to let the opportunity pass.”

Macrow, the 2007 F3 champion, was understandably disappointed with the result.

“I really struggled with our wet set-up today,” Macrow said.

“I think if we went for a half wet/half dry configuration we would have had a better chance … just as the car started to feel settled and I made ground on Joey we had another great downpour. From then on, the championship was pretty much his.”

In the other classes competing at the final round of the Shannons Nationals, Queenslander Matt Kingsley secured the Porsche GT3 Cup Challenge title, holding out his series nemesis Sven Burchartz.

While Kingsley and Burchartz battled for the title, it was Victorian Jeff Bobik who bagged the big points, using his local knowledge to take out the round win.

In Commodore Cup, Victorian Brett Holdsworth maintained his winning form to take out the 2009 title ahead of Tony Bates. Jason Domaschenz and Bates shared the wins in the three races.

And the final champion to be crowned was Sydneysider Garry Holt, who took out the 2009 Boylan Traffic Solutions Australian Manufactuers Championship. Bathurst 12 Hour victors Rod Salmon and Damien White combined to win both one hour races.

The Shannons Nationals returns in 2010, kicking off with Round 1 at Wakefield Park Raceway on the March 6-7.