Wallis in the box seat for Shannons V8s title

Wallis in the box seat for Shannons V8s title 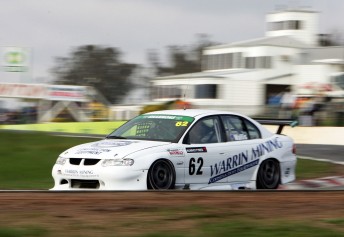 THE Shannons V8 Touring Car National Series will conclude its second season this weekend at Sandown International Raceway, and despite the small entry list, the title is wide open.

With 120 points up for grabs over three races, it’s anyone’s game.

Wallis, who won the opening two rounds of the series at Wakefield Park and Mallala, says he plans to “stay on the road” to ensure he has the best shot at winning the title.

“I have raced in Fujitsu V8s but I’ve never had a good car for a full season before this one,” Wallis said.

“This year the car has been great and it’s been very competitive, so it would be really good to win it. It would mean a lot. The plan is to stay on the road and make sure we finish.”

With rain forecast this weekend in Melbourne, Ford driver Terry Wyhoon has every right to feel confident after a strong run in the wet at Winton earlier this season.

Smerdon has an outside shot at the title behind the wheel of his ex-Russell Ingall, Stone Brothers AU Falcon and will again be joined by South Australian team-mate Michael Bartsch.

Other notable contenders amongst the nine car field this weekend include outgoing Fujitsu V8 Series champ Steve Owen, and Queenslander Jonathan Beikoff, who is making the trip south.