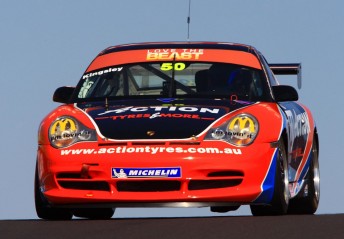 GT3 Cup Challenge title leader Matt Kingsley is throwing everything at victory this weekend at Sandown to ensure he wins the all-Porsche title.

Kingsley has completely rebuilt his Porsche 996 since the last round at Morgan Park in an attempt to secure his first national crown. He holds a comfortable, but not unassailable, 68 point lead of Sven Burchartz.

Kingsley has not raced at the Sandown circuit since 2004 but is confident his rebuilt Porsche will be able to do the job.

“Go out all guns blazing,” he said of his weekend plan of attack.

“The car has been fully rebuilt since the Morgan Park round where we found a number of issues with the car that needed to be re-addressed. The main one being the engine. It has done 15,000km of racing and after compression plus leak down test there was a question mark on whether it would see the end of race 3 without a major explosion!”

Ninety points are up for grads this weekend, and Burchartz is hoping to perform well on his home track.

“It’s my home track – It’s the first race track I ever drove on and I’ve had some very good results there,” he said.

“It was also the track at which I took out the 2007 Porsche Drivers Challenge title so it has many happy memories for me.”