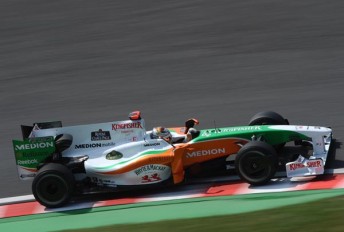 Adrian Sutil, pictured, and Vitantonio Liuzzi have been retained by Force India for 2010

Force India has confirmed that it will retain its end of season driver line-up for the 2010 Formula One season, with Adrian Sutil and Vitantonio Liuzzi returning to the team next season.

Dr Vijay Mallya’s team enjoyed glimpses of speed in 2009, with Giancarlo Fisichella scoring second place at Spa, leading to the Italian switching to the team’s engine supplier, Ferrari, for the rest of the season from the following event at Monza.

Sutil scored his best F1 finish at the Monza circuit with fourth place, the same event that Liuzzi joined the team as a full-time race driver in Fisichella’s place.

“We are very pleased to retain the services of both Adrian and Tonio for another season,” said Mallya.

“We have always maintained that consistency is key at this stage in the team’s development and for the first time in many years we will have the continuity of not only the same drivers, but also the same engine and senior management.”

Sutil will start his fourth season with the team next season, having been a part of the squad as a part of its two previous incarnations, Midland and Spyker.

“I feel good here, it feels like family, and when you feel at ease you can focus your energy 100 percent on getting it right on track,” said Sutil.

“Next season I want to be in the points on a regular basis, maybe even challenging for the podium, and the team has exactly the same goals. We are going massively in the right direction so with our combined energies I’m confident we can achieve even more than last season.”

Liuzzi, the 2001 world karting champion who for so long was part of Red Bull’s F1 plans, said that it was always his goal to return to F1 full-time next year.

“I feel the five races I did in 2009 were a bit of a warm-up; get back racing, learn the car, get the feeling back,” said Liuzzi.

“Now I’ve done that I feel ready to really push next season. We were pretty strong in the last part of the 2009 season so if we pick up where we stopped I think we could be in for a good year. For sure points are the aim and showing everyone what we can do.”