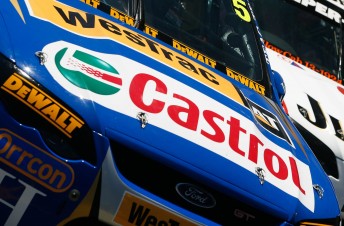 Castrol will up its presence in the V8 Supercar Championship Series next year, taking bonnet sponsorship of FPRs Falcons, plus a full-car deal with Paul Morris Motorsport

Despite announcing mid-year that it would withdraw from title sponsorship of Steven Richards’ #6 Ford Performance Racing Falcon at the conclusion of this season, Castrol will continue its partnership with the factory Ford team, displaying its logos on the bonnet of the FPR Falcons.

The PMM Castrol car (which will appear in predominantly red and green livery with Castrol Edge decals) is expected to be driven by yet-to-be-announced new signing Greg Murphy. The deal will be announced at the Sydney Telstra 500 next week.

“Castrol has been involved with FPR from the very beginning and the partnership continues to deliver both on and off the track,” Castrol Lubricants Marketing Director, Andrew Johnson said.

“Steven Richards and Mark Winterbottom are top level drivers and great ambassadors for our brand.

“We’re very excited about the new partnership with PMM, they are a long standing, professional team and we will field a highly competitive car and driver, plus their team facilities in Queensland are first class.”