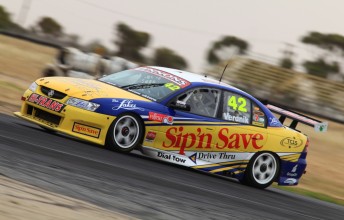 The Fujitsu V8 Supercar Series will have a season-high entry for the final round of its championship at Sydney Olympic Park next weekend.

To date, 23 cars have entered for the inaugural Sydney street race, although it is expected that 21 cars will arrive to compete.

On the outer is Daniel Gaunt (McElrea Motorsport), who has withdrawn from the event after a sponsor of his withdrew its support.

Compared to past seasons, the Fujitsu Series has struggled for numbers. The feeder class has not seen more than 20 cars entry a meeting all year, and category co-ordinator Damien White says that the hype surrounding the new Sydney race has helped the increase interest.

“The Sydney Telstra 500 has appealed to a large corporate base, ticket sales are great, and therefore, the teams are seeing value in entering,” he said.

Winslow’s appearance for Jay Motorsports is a V8 debut 12 months in the making. The 2008 Australian Formula 3 Champion has long held an ambition to make it into the V8 leagues, and he recently tested with two Fujitsu teams – Jay Motorsport and Greg Murphy Racing.

Howard returns to the class having only competed in one round this year at Queensland Raceway. There, he was hamstrung by engine problems for the majority of the weekend and now he wants to have a proper go.

Owen is set to drive for TAG Motorsport, driving the car that Tony Bates has campaigned in selected rounds this year.

The Fujitsu V8 Series will support the inaugural Sydney Telstra 500, to be run next weekend (Dec 4-6).