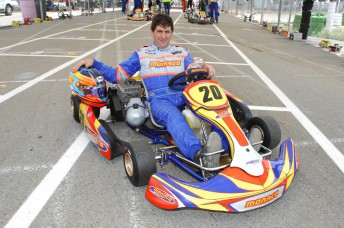 Remo Luciani is aiming for State Crown #50 this weekend at Bolivar. (Pic: photowagon.com.au)

Remo Luciani is hoping for an early Christmas present in the form of the 50th State Championship of his career when he takes to the Bolivar Raceway in South Australia this weekend.

The karting veteran, who had his first drive of a kart 28 years ago at the age of 21, secured his 49th state crown at the Victorian Championships in May and he desperately wants to secure his 50th title before he hits the half-century mark in the age stakes next May.

Since starting his karting career aboard a Victa-powered kart on a dirt track in his hometown Luciani has developed into one of the most iconic figures in Australian karting.

While his main focus is on securing the win in the Clubman Over 40s category Luciani believes that he will also be keeping the ‘young blokes’ honest in the Clubman Heavy class this weekend.

“I’ve been sitting on 49 state titles since the start of the year and this is my last chance this before the end of the year to get number 50. Hopefully I can get the job done,” said Luciani.

“I’m realistic about my chances in Clubman Heavy and the battle for the over 40s win is going to be pretty tough as well but I’m here to give it my best shot.”

The Bolivar Raceway is one of his favourite circuits and he has tasted success on numerous occasions, however, Luciani knows the local drivers like Darryl Tolmer, who won the 1987 Australian Clubman Light Championship, and Simon Layne won’t be making his life easy in the Clubman Over 40’s category.

“The layout of the Bolivar Raceway is one of the best in the country with a good mixture of tight, flowing and technical sections. It has also been very kind to me in the past,” said Luciani.

“Tolmer really had my measure last time I was here but he had some mechanical dramas in the final, sometimes you win them and sometimes you lose them – that time I came out the winner. He will again be tough to beat on his home track, as will Simon Layne.”.”

Along with his career behind the wheel, Luciani has also played an instrumental part in the careers of many motorsport stars, including V8 Supercar Champion Jamie Whincup. Luciani was Whincup’s mentor and mechanic when he secured his pair of Australian CIK Karting Championships.