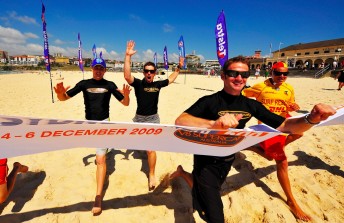 Usually, V8 Supercar drivers don’t like to spend time in the sand. Yesterday, Will Davison, Mark Winterbottom, Tony D’Alberto and Lee Holdsworth spent the day on the beach, promoting the Sydney Telstra 500 and its link with official race charity – Surf Life Saving Australia.

Telstra is a major supporter of the Surf Life Saving orgnaisation, and the drivers were put through their paces by some of Bondi’s best lifesavers. The drivers were pitted against the lifesavers in a series of endurance events, including a beach sprint. As the photo suggests, Davison crossed the line first, and D’Alberto was last, but The Bottle-O driver says that he would have liked to have spent more time in the sand.

“We only got to spend an hour or so on the beach, so we didn’t have enough time to go for a surf!” D’Alberto said.

While in Sydney, the trio got to have a look at the race circuit at the Sydney Olympic Park precinct, and D’Alberto told Speedcafe that the new street circuit has come up a treat.

“The track as come up really good,” he said.

“They haven’t finished it yet, but it looks great – it looks really challenging. Some of the corners have blind crests, drop off on exits and the cars are going to move around a fair bit. Some of the braking areas are pretty tough too, and it will be hard to slow the cars down, but I think it will be exciting.

“On paper, it doesn’t look that thrilling, but when you go there, it’s come up really good. It looks like they’ve invested a fair bit in it.”

D’Alberto acknowledged that some the width of the track varies from narrow to wide across the lap.

“Down the straight, it’s six lanes wide, but then at some of the corners, it’s only two lanes wide. It definitely changes a lot during the lap,” he said.

“There’s lots of seating that’s basically right on the track. All the fans are going to be up close to the cars which will be great for them. But then there’s a lot of area within the precinct where people will be able to walk around and still be inside the circuit where they can watch the racing or go have a look at the concerts or family areas.

“There’s a bit of everything there for everyone. In my opinion, it will be a great event.”

It is just over a week before the Sydney Telstra 500 kicks into life, running over three days, starting next Friday (December 4).