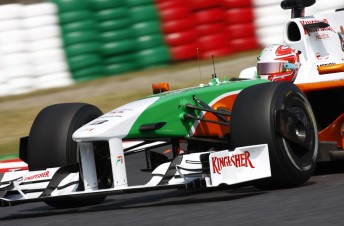 Di Resta, driver of a Mercedes in DTM, finished third in this year’s DTM and has already had a taste of F1, testing for McLaren at the end of last year.

American Hildebrand has never driven an F1 car, although does have a good level of experience in open-wheelers after winning this year’s Indy Lights title.

The two drivers will share the Force India VJM02 chassis – the only chassis the team is bringing to the circuit.

At this stage, Force India has not confirmed either of its drivers for the 2010 season.

Other drivers due to test Formula 1 cars in the Jerez test include Australian Daniel Ricciardo, who will share a Red Bull Racing car with Kiwi Brendan Hartley.

BMW Sauber is making good its promise to field a car for Alexander Rossi and Esteban Gutiérrez, even though the company has pulled out of F1 for next year.