Hendrick says Johnson not finished yet

Hendrick says Johnson not finished yet 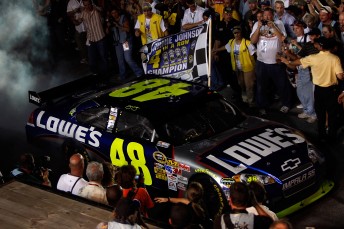 Rick Hendrick has admitted that the Jimmie Johnson – Chad Knaus – Hendrick Motorsports steamroller has not finished flattening its opposition in NASCAR.

Speaking mid-week after Johnson became the first driver in NASCAR history to win four consecutive titles, Hendrick said that it will be hard to judge Johnson’s achievements while he is still racing, as well as stating that his NASCAR dream team still has more winning to do.

“I don’t think people really start looking at where a driver ranks until he’s retired or down the road,” said Hendrick.

“But you don’t really give them their time in the sun or you don’t acknowledge how great they were until after. Usually sometimes they retire or they quit winning.

“I think when you look at Jimmie’s stats, I don’t think he’s through. I think he’s better this year than he was the year before. He just gets better all the time, he and Chad (Knaus, #48 crew chief) both.

“So I don’t think he’s through setting records. I think he got to say with looking at what he’s accomplished and he was eight points away from this one being number five in a row. He’s got to be one of the greatest of all time.”

Hendrick also pointed out that he is working hard to secure the long-term future of Knaus at Hendrick Motorsports.

Knaus is widely regarded as the best Crew Chief in NASCAR and in some circles is thought to be just as important to the #48’s success as Johnson himself.

With Johnson recently re-signing to stay onboard with Hendrick until the end of 2015, and sponsor Lowe’s to the end of 2013, Knaus is the final piece in the puzzle.

While Knaus admitted in the past that team ownership was a tempting proposition for him, he has since lost that urge, possibly in part due to the recent history of one of his mentors, Ray Evernham. 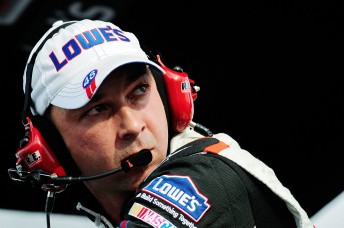 Everham left Hendrick Motorsports while in a similar position to Knaus, having guided Jeff Gordon to multiple championships, to start his own team. Evernham has since sold out of his race team.

Now Hendrick is looking to lock down Knaus, who even stars in his own TV commercials for Kobalt Tools, a Lowe’s brand, and enjoys a higher profile in the US than many drivers.

Knaus’ deal could also include other investments and assets within the Hendrick empire of race teams and other business interests, including one of America’s biggest car dealership networks, in a similar relationship that Hendrick enjoys with Gordon, who is listed as a part owner of the #48 Sprint Cup team.

“You know Chad and I are looking at other things to secure his future and investments,” said Hendrick.

“It’s kind of a foregone conclusion between us that he’s going to be here.

“You know, we’ve got to get the paperwork done, but we still have a year and a half left (on the existing contract). So it’s something we’re doing. We try to get all our guys in place well ahead of when the contracts are up. So that’s underway.

“I plan for him to retire here. I think that’s what he tells me he wants to do.

“Chad and I have talked about where he would like to be down the road. We’ve talked about it many, many times. But he is happy. He likes his role as a crew chief right now. You’d have to look at the success he and Jimmie have. He’s happy doing that.

“But down the road when he’s tired of being a crew chief, he can make a big impact on the whole company. He’s already doing that.

“But for the foreseeable future, I’d say for the next five years, and if he gets tired in three, we’ll do something else. But he tells me that he wants to do this, and the number he gave me was another five years.” 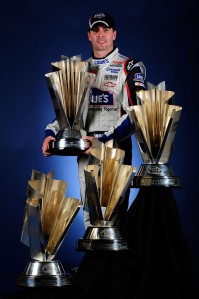 Hendrick also gave clues to a greater responsibility already being in place for Knaus over Hendrick’s four Cup teams, which finished first, second and third in the Sprint Cup standings this season with Johnson, Gordon and Mark Martin, while Dale Earnhardt Jr finished in a lowly 25th in the team’s fourth entry.

“He (Knaus) enjoys being in the middle of the team,” said Hendrick.

“Now the way we work together, he’s got input into four teams not just one team.

“It really wasn’t quite that way when Ray was here. It was more individualised than it is today. So he enjoys the box. He enjoys being the field general.

“He likes working with Jimmie. They are writing the record books. And he’s always looking at what is the next rung on the ladder that we have to accomplish to be, you know, one of the best of all time.

“So I think Chad really would be bored doing anything else, and he spends about 20 hours a day, seven days a week planning for the future.

“He was talking to me by text Sunday night, because I was in the hospital (ED: Hendrick missed the Homestead finale to be with his niece as she underwent an emergency kidney transplant). He was already talking about 2010 and some things he wanted to do.

“I thought ‘man, you ought to go celebrate this one’. But it amazed me how the guys are right back in here Monday morning, digging again. Getting ready for next year.”

With that, every other driver and team in NASCAR needs to start worrying …