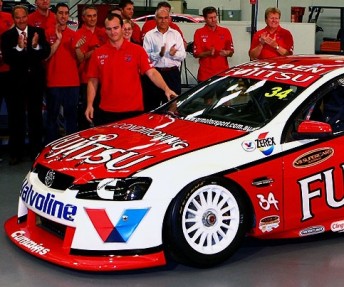 Lee Holdsworth helps unveil the Fujitsu livery last month. Next year, he is likely to have his own new car to compete in

Garry Rogers Motorsport will debut a brand-new Commodore VE at the first Australian round of next year’s V8 Supercar Championship Series.

Lee Holdsworth is likely to be the first to race the car at the Clipsal 500 next year (March 11-14) after team owner Garry Rogers has elected not to rush the build of the car to make the opening two rounds of the series in the Middle East (Abu Dhabi and Bahrain).

“We won’t be taking it overseas,” he said.

“For starters, it won’t be ready. Our aim at this stage will be to have it ready for Adelaide. We’re doing a lot of development work on our existing cars, which needs to be accomplished before the start of next year. Barring mishaps, we’ll have the new car ready.”

Rogers says that if the team stays on schedule, there’ll be no need to leave any mechanics home while the Middle Eastern rounds are on.

“The fabricators are working on the new car, and it will take not much to put it all together,” he said.

“I don’t see us needing to leave anyone home because I don’t think we need to, especially if the fabrication side of it is up to schedule.”

Michael Caruso was given the keys to GRM’s latest new car, and according to Rogers, it would be Holdsworth’s turn to get the new Commodore.

“On our rolling agenda of cars, it should be for Lee, but we haven’t made a official decision there yet,” Rogers said.

GRM will carry new major sponsorship next year from Fujitsu General. That sponsorship deal was announced in October.