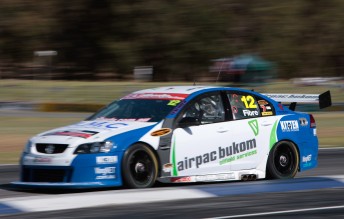 There’s a better than even chance that Triple F Racing will be on the grid for selected Fujitsu V8 Supercar Series rounds in 2010.

Triple F competes in the V8 Championship Series, headed by Dean Fiore. The current Commodore VE that Fiore campaigns will be sidelined next year, making way for the Triple Eight-built Falcon BF that the team purchased from the defunct IntaRacing operation.

Fiore told Speedcafe that he won’t commit to entering the car in the Fujitsu Series just yet, in case his Falcon comes back from the overseas races worse for wear.

“First things first, we’ve got to sort out our Main Series program,” he said.

“We’re going to have this current Commodore here, just in case the Falcon comes back from the Middle East undriveable.

“But there’s every chance that one of the boys could be on the grid at Clipsal.”

So, how do brothers decide which one gets to make their debut in the Fujitsu Series at the Clipsal race?

“Honestly, I don’t know. Probably which ever one fits best with work. They’re work commitments are pretty big.”

Triple F has run its main series entry this year prepared by Paul Morris Motorsport. In 2010, the team is setting up its own base on the Gold Coast.