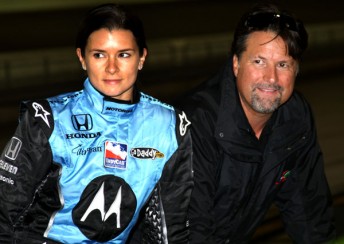 Michael Andretti, right, has now completed his takeover of AGR, paving the way for the re-signing of Danica Patrick

Andretti’s former partners in AGR, ex-pat Aussie Kim Green and Kevin Savoree, has finalised a deal with Andretti that will see the former CART champion take full ownership of the Indianapolis-based team.

The operation has run as a four-car team in the IndyCar Series for some time now, with Tony Kanaan, Danica Patrick, Marco Andretti and Hideki Mutoh as its drivers in 2009.

Mutoh and the Honda ‘Formula Dream’ backing are on the hunt for a new team in 2010, with Andretti likely to score Ryan Hunter-Reay and IZOD sponsorship for the fourth entry.

“This is a great day for all of us,” said Andretti.

“We’re very excited about the future of the team and we are looking forward to being a contender again in 2010.

“Everyone at Andretti Autosport is 100 percent focused on winning races and championships. We have a lot of work to do this winter, but everyone is committed to the job and we’re looking forward to 2010.”

Deals for Hunter-Reay and Patrick are said to have been waiting on confirmation of the new team structure, paving the way for further announcements soon.

Green and Savoree will now concentrate on the other side of AGR’s business, the Andretti Green Promotions company that promotes IndyCar Series events in St Petersburg, Florida and Toronto, Canada.