V8s to turn first laps next year in Australia

V8s to turn first laps next year in Australia 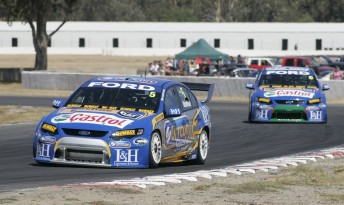 The pre-season test at Winton last year will happen again next year – only a month earlier ...

V8 Supercars might be kicking-off the 2010 season with two races in the Middle East, but the cars, teams and new drivers will still get a local hit-out before leaving Australia’s shores.

Victorian-based V8 teams will have their pre-season test at Winton (Monday, Feb 8), while Queensland squads will get their first miles for 2010 at Queensland Raceway (Wednesday, Feb 10).

It’s the first time in the history of V8 Supercars and the Australian Touring Car Championship, the opening round of the series will be held overseas (Abu Dhabi, Feb 18-20).

Two planes will jet from Avalon (Vic) and Brisbane (Qld), bound for the Middle East on either the Saturday or Sunday after the tests.

Ford Performance Racing team principal and V8 board member Tim Edwards told Speedcafe that some teams will burn the midnight over the shorter off-season to be ready for 2010.

“The big difference is that it’s a month earlier,” he said.

“The distance between the last race of this season and that first test is four weeks shorter than what we had this year.

“Yeah, my team has got all its cars, but there’s a lot of things that have to be prepared in the off-season – new team kit, garage panelling, spares, new fire suits for the team and drivers – they are all massive jobs.”

The early season start also means that the traditional V8 Supercar series launch won’t be undertaken as it has been done in the past. It is likely that two separate events will occur, one in Victoria and one in Queensland.