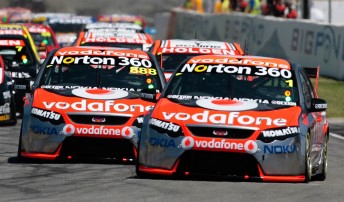 It's been a golden period for Triple Eight Race Engineering

Triple Eight Race Engineering will lose Dexion as a team sponsor at the conclusion of this season.

The news, however, is not something that team boss Roland Dane is too fussed about.

He told Speedcafe that with Dexion going in a different direction, he now has the choice of three partners to support his Holden team for 2010.

In an age when attracting sponsors to support motor racing is difficult, according to Dane, he can now choose who replaces Dexion.

“We’ve got a situation because Dexion is not renewing,” he said.

“We’ve had a great relationship with them. It’s been a great sponsorship for us – and for them – and it is moving onto different things, which happens. They’ve given us plenty of notice.

“We’ve got some good options sponsorship-wise.

“We’ve got three people that we can put in their place. We haven’t made a decision on who that is yet. When we make that will be public, I’m not sure? The deals are going on right now.”

Having the choice between sponsors is a sign of Dane’s team domination – on and off the track.

“That’s a reflection of not only success, but the hard work of the commercial people at Triple Eight like Peter Jamieson, the team and drivers who put in and deliver value for money for the sponsors,” he said.

Which ever sponsor is selected, the signage will remain minimal, in keeping with Triple Eight and Vodafone’s policies.

“The corporate policy of Triple Eight, and therefore Team Vodafone, is to keep the cars as clean as possible and limit the number of sponsors we carry on the car,” he said.

“That’s been the same for the last three years.”

Earlier this year, Vodafone extended its deal with Triple Eight for a further three years. Team drivers Craig Lowndes and Jamie Whincup have also signed similar deals, with both committing to Triple Eight until the end of 2012.

The past four years have been a magical period in Triple Eight’s history. The team has won three Bathurst 1000s, the 2008 championship, and Whincup currently sits a comfortable 281 points ahead of his nearest rival in this year’s V8 Supercar Championship Series. Only a distater at the Sydney Telstra 500 will deny him back-to-back V8 championships – the first since Marcos Ambrose (2003/04).