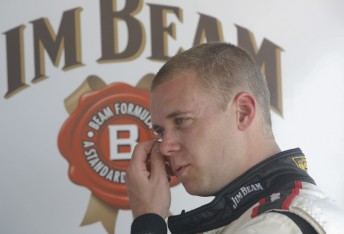 Speedcafe understands that the REC sale remains subject to documentation being finalised.

As it stands now, the sale will keep the V8 field at 29 cars for 2010, unless another REC is put on the market between now and the start of next season.

The REC (that Jason Bright has competed with this year) was originally set to be discussed in a board meeting on the Monday after the final round of the championship at Sydney Olympic Park in two weeks time, however, the parties involved requested an early decision to allow more time to prepare for next year.

The purchase of the REC will see the Webbs become the REC owners and use it at Dick Johnson Racing, who will field a third car. Webb has secured a deal with Triple Eight Race Engineering to purchase one of its current TeamVodafone Falcon FGs, which will be run out of the legendary Queensland team’s shop next year.

Webb, the leader of the Fujitsu V8 Series with one round to go, drove for the Jim Beam Racing team in this season’s endurance races, finishing with a best result of sixth at the L&H 500 at Phillip Island.

DJR has also secured all of the running gear from the soon-to-be defunct Paul Cruickshank Racing team, which has used Triple Eight equipment this year. DJR will also buy PCR’s team transporter.