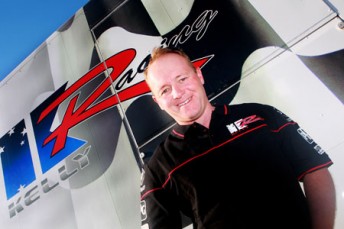 Jason Bargwanna will drive with Kelly Racing in 2010 after signing a deal with the Holden team over the weekend.

Bargwanna’s appointment at the family-owned team means that it now boasts three former Bathurst 1000 winners – Todd and Rick Kelly and Bargwanna – the only V8 Supercar team in the field to do so.

The feisty 37-year-old leaves Sprint Gas Racing after it announced over the weekend that it will close its doors at the completion of this season.

Kelly Racing fields four cars in the V8 Supercar Championship Series, with the fourth seat still to be determined.

The future of Kelly’s other driver Mark McNally is up in the air.

The signing of Bargwanna leaves a shortage of experienced talent to fill the remaining seats in the field.

Team owner and driver Todd Kelly is glad to have locked away one of his drivers for 2010.

“This is great news for Kelly Racing,” said Todd Kelly.

“All the boys are really excited about ‘Bargs’ joining us next year and they can’t wait.

“It’s fantastic for Rick and I to have a driver to push us along and put us under pressure.”

“From the outset I’ve always focused on the fact that I want to be in a competitive opportunity and I really respect what Todd, Rick and the whole team are putting together.

“I’m just so excited about this opportunity and I think that it has all the ingredients to deliver, Rick, Todd or myself a championship because there is no doubt that we’re all very focused on it, we get on quite well and we race hard.

“I think it is going to be a good season next year.”