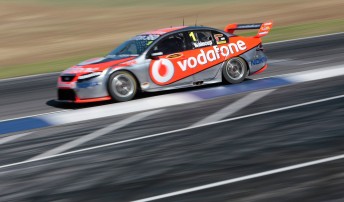 Jamie Whincup wins Race 23 of the 2009 championship in Perth

Whincup used his Dunlop Sprint tyres for the entire duration of the race, cruising to the win ahead of Todd Kelly (Jack Daniel’s Racing).

The win for Whincup gives him a 161 point championship lead with three races of the series remaining. After a shocking round at the Surfers Paradise SuperGP, Whincup feels he’s back to his best.

“The Gold Coast does feel like a long time ago,” he said

“We showed fantastic pace today. We used most of our Sprint tyres today. We’re going to have to wait and see tomorrow if that was the right thing to do, championship-wise, but we’ve just got to get the most amount of points we can. But this was a fantastic result.”

Kelly finished second, using his Sprint tyre to start the race. The result gives him his first podium finish for his Kelly Racing team, and the team’s third podium in as many races.

“When you work so hard for something, it’s a hell of a lot more rewarding,” he said.

“The boys have done a magic job since the beginning of the year.”

Winterbottom and James Courtney (Jim Beam) were third and fourth and both finished the race with the Sprint tyre.

Fifth went to Will Davison (Jim Beam), ahead of pole sitter Craig Lowndes (Vodafone), Rick Kelly (Jack Daniel’s) and Greg Murphy (Sprint Gas). Murphy’s eighth place was helped by the fact that he switched to the Sprint t

Supercheap Auto Racing’s Russell Ingall was ninth and best of the finishes who didn’t use the Sprint tyre.

Steven Johnson (Jim Beam) rounded out the top 10, while local hero Garth Tander (Toll HRT) finished 11th but did not use his soft tyre during the race.

The heartbreaking story of the race was for Bundaberg Red driver David Reynolds. The Victorian driver was running a genuine second for the better part of the race, but with six laps to go, slipped off the road when the front left tyre of his Commodore blew. He eventually finished 28th.