Weeks in charge at Classic Adelaide

Weeks in charge at Classic Adelaide 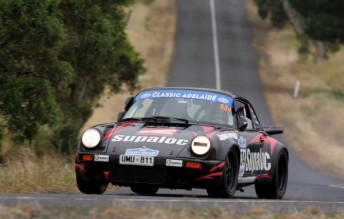 Kevin Weeks is just one day away from scoring back-to-back wins in the Classic Adelaide. PHOTO CREDIT: Perfect Prints

Kevin Weeks is in the box seat for a third straight Classic Adelaide rally victory after tip-toeing through greasy conditions that claimed other high-profile drivers on day three in the Adelaide Hills today.

Weeks and co-driver Bec Crunkhorn finished the penultimate day with a three-minute 22.8-second lead in the outright Late Classic category over fellow 1974 Porsche crew Roger Paterson and Paul Whatnell, with Hamish Gibson and Ben Collins a further 10.3 sec. behind in a 1980 Holden Commodore.

Today started with the shock retirement of overnight Modern category leader Tony Quinn, whose brand-new $160,000 Nissan GT-R ran off a bend on Montacute, the first of seven scheduled stages, and landed in a creek bed.

Quinn and co-driver Naomi Tillett appeared unhurt, but the car was retired with unspecified damage, leaving Denmark’s Allan Simonsen to lead for the rest of the day unchallenged after second-placed rival Tony Longhurst suffered engine failure in his Subaru Impreza and also retired.

Weeks started conservatively in the morning’s wet conditions and said he’d had to keep the front-mounted fuel tank of his Porsche 911RS topped-up all day to maximise weight over the front wheels.

But he still won five of the stages, including the demanding 13.16 kilometre Gorge Road on which he beat even the faster Modern cars.

“After a wet morning, Gorge Road was drying and the last stage, Teringie, was dry, so I was able to have a go,” Weeks said. “But it’s a long rally still. Tomorrow is the last day and that’s when you start to hear little noises in the car. Anything can happen, as it did to us in 2005 and 2006. Roger (Paterson) is behind us and he always comes on toward the end of an event.”

The closest battle over the first three days of the 13th Classic Adelaide has been in the Classic category for cars built between 1948 and 1971 and it looks set for an exciting finish despite a terminal setback for leading contender Cameron Wearing.

Devenish admitted his approach had been dampened by the deaths of friends David Carra and Gary Tierney in a rally crash on Thursday, but said he would push on to the finish and aim for a win.

Devenish’s main rival from Thursday and Friday, the 2007 and 208 Classic category winner Cameron Wearing, dropped off the pace this afternoon with a mystery electrical problem.

While running in second place, Wearing’s 1967 Ford Mustang developed an ignition problem that eventually sidelined it before the start of the second-last stage.

The final day, sponsored by starts at 8 am outside the Hilton Adelaide rally headquarters. The first car is due at the King William Road finish around 2.40 pm.