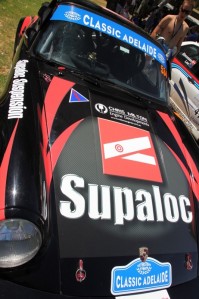 Defending champion Kevin Weeks and his 1974 Porsche took the outright lead at the halfway point in the Classic Adelaide rally after a simple part failure ended a potential event-winning run by Holden rival Steve Glenney today.

Weeks and co-driver Bec Crunkhorn, who had been running second to Glenney almost since yesterday’s start, assumed the lead on the sixth of eight closed-road special stages run in the Fleurieu region.

Roger Paterson and Paul Whatnell, in a car similar to Weeks’, are third.

Today’s second day of competition started without one of the Late Classic category’s most popular teams, Gary Tierney and David Carra, both from Melbourne, who had been running eighth when they died in a crash on a stage yesterday afternoon.

Weeks and many other competitors in the 170-car field paused for a prayer and a minute’s silence, before the 8 am start in Adelaide’s Victoria Square.

The cars raced with a black stripe on their left headlights and two wreaths were hung in the garage bay the crew’s car had occupied.

Glenney’s retirement was reported to have been caused by the failure of engine drive belt in his 500-horsepower Commodore. It was not known if he would resume the competition tomorrow, but the problem has certainly ended any chance of a high-ranking result.

While Weeks starts Day Three in a comfortable position, the race is tighter in the Classic category for older cars and the newly-introduced Modern section, which does not count for the outright prize.

Weather conditions cooled considerably after yesterday’s 43 degree scorcher, helping drivers preserve their machinery and their tyres for the weekend.

Tomorrow’s seven scheduled stages take crews into the Adelaide Hills after an 8 am start in the city.