Kelly admits Perth will be tougher than PI

Kelly admits Perth will be tougher than PI 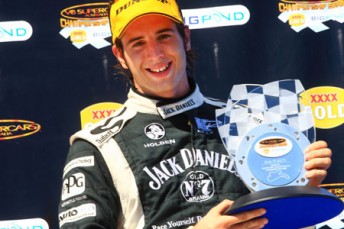 Rick Kelly admits that it will be tough for him to match the efforts of Jack Daniel’s Racing’s recent podium scoring spree at Phillip Island in Perth this weekend.

Kelly is confident that he and brother Todd’s new team can perform well in Perth this weekend but the 26-year-old points out that the pace of the Jack Daniel’s Commodores was helped by the fact that Phillip Island was the first time that the team had been to a circuit for the second time.

“It certainly did help,” said Rick Kelly of the team’s second visit to Phillip Island.

“Phillip Island the other weekend is a taste of how we are going to be next year, because really it’s the first time that we go to all the events as a team this year.

“So Perth is going to be a little bit tougher for us compared to going back to Phillip Island the second time. But in saying that we’ve still had great pace at all the other tracks we’ve been to for the first time.

“We’ve just got to work at learning as quickly as we can and use all four cars to our advantage to get a set-up early in the weekend.”

The 2006 V8 Supercar Champion scored third place on Saturday at the last event at Phillip Island, followed up by second on Sunday behind series leader Jamie Whincup, but Kelly says that it is difficult to aim for two good results at Perth this weekend due to the re-introduction of Dunlop’s soft ‘option’ tyre for the 13th event of the 2009 championship.

“It’s the first event that we’re using the soft tyre in a long time, since before the enduros, so we need to click our heads back into that thought-pattern and work out how to best use that through the weekend and use that to our advantage,” said Kelly.

“It makes it hard to get a solid result both days because you only have one set of the soft tyres. So we’ve got to work out the best time to use them on our Jack Daniel’s Commodores and also how long they will last on that surface.”

Rick also wants to see brother Todd on the podium some time soon, after Todd was able to equal his brother’s pace at Phillip Island, but was involved in a clash with Craig Lowndes on Saturday and a pit lane altercation with Garth Tander on Sunday.

“We’re pretty keen to bring home some more silverware: Particularly Todd because he had great pace at Phillip Island but he had some bad luck.

“So we’re coming off a bit of a high from Phillip Island going into Perth.”