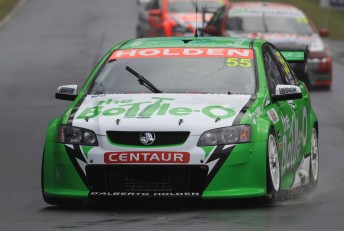 Tony D’Alberto Racing’s purchase of a V8 Supercars Racing Entitlements Contract – the ticket to race in the V8 Championship Series – is a realisation of the team’s five-year plan.

TDR secured the #3 REC from Tasman Motorsport, which has sold both of its entries.

The Victorian-based Holden team started its V8 squad in 2005 in the Fujitsu V8 Series, with Tony D’Alberto eventually winning that title in 2007. In conjunction with Rod Nash Racing, TDR moved into the Championship Series in 2008, using the #55 RNR REC.

When Nash elected to take his REC and The Bottle-O sponsorship to Ford Performance Racing for 2010, TDR began hunting for an entry in July, and according to team owner Al D’Alberto, the confirmation of this week’s sale is in keeping with the TDR’s long-term goals.

“We’ve been very keen to get a licence (REC) and we’re very pleased to be able to secure it,” D’Alberto told Speedcafe.

“I appreciate the chance to have a crack at this ourselves and run our own team.

“It’s been part of the five year plan we’ve had, and now this is the basis for the next five years of our time in the sport.

“It certainly shows that there’s a path to get into the category through the Development series. We’re finally there, so now we can start the next phase of our plans.”

D’Alberto said that the structure of the team will remain the same in the immediate future.

“Nothing really changes for us for next year, compared to this year, other than the sponsorship,” he said.

“We’ve got to get our heads around owning it first, and then we’ll make some changes in the off-season, whether that’s to improve performance or the way we operate. There really isn’t a lot that changes.

“Within a couple of weeks, we’ll be firming up our plans.”

It was confirmed in Wednesday’s V8 Supercars board meeting that three of the four RECs that were up for available were sold, with the final REC (Britek) to be reviewed again after the Sydney Telstra 500.